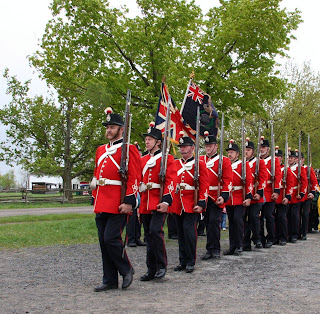 THE QUEEN'S BIRTHDAY, HISTORICAL BACKGROUND
The Queen's Birthday was widely recognized as an important national holiday by the 1860's.  Although a few citizens probably disapproved of the additional unpaid day off, this holiday was extremely popular.  The Queen's Birthday presented a chance to get outdoors after a long winter and to celebrate the blessings of monarchy.  Traditionally, the Queen's Birthday was an appropriate time for the regular military and sedentary militia (non-uniformed civilian men of the local area) to muster, patriotic speeches, parades, and sporting and athletic demonstrations.
Queen Victoria was born May 24, 1819.  On June 20, 1837, at the age of 18, she became the Queen of Britain.  She ruled from 1837 to 1901.  Queen Victoria and Albert were married in 1840.  The royal couple had 9 children.  The popularity of the Royal Family was reflected by the strong public interest when the Prince of Wales came to open Victoria Bridge in Montreal in 1860, and in the widespread and heartfelt grieving that took place throughout the Empire when the Queen's husband died in December, 1861.  In May 1866, the Queen was celebrating her 47th birthday, and the end of the 28th year of her reign.
See us at the Queen's Birthday Celebrations, Sunday May 19, 2013,
Upper Canada Village, Morrisburg Ontario.
Posted by Unknown at 13:14