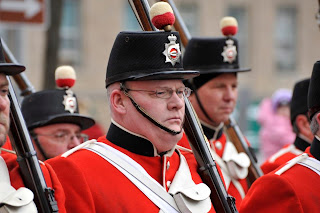 Long underwear was the unseen uniform of the day. The temperature hovered just above zero, the sun peaked through occasionally, but the north wind was deadly. We were mostly protected by the buildings along King St, but at every intersection came the reminder of the cold.

Our turnout was impressive, 19 members on parade. Leadership was delegated to Sgt Lindsay who did a great job of "herding the cats" down King St. SSgt Mike was awarded the day, off as he was enjoying a well deserved vacation in Florida. He was obviously warmer than we were. We will get you. The volleys were good and once again no ducks were harmed in the process. The fifing and drumming was great and kept us in pace. The colour party carried the colours proudly. Mike, you would have been proud of the group! Thanks to Denis and Tom M for shuttling us back and forth. We could not have done it without you.

The spectators were sparse. A comment on the cold, I suspect. The young kids were not warming their ears - they have learned what comes next as we halt in front of them.

Terry was singled out (in photo) for his excellent drill skills and will be promoted to Captain next week :-). Thanks Paul & Laura M for hosting our annual post-parade get-together. I think I have finally warmed up and ready for next Saturday's two parades.
Posted by Unknown at 14:08